When you think of surfing, you probably imagine super tanned, blonde hotties shredding it up on monster waves in California or Hawaii. However, people in Florida are riding the waves- West Broward High has its own surf club.

West Broward High's Ymke Franssen, a junior from the Netherlands, started a surf club in February to show kids that surfing is more than a sport.

"I've always wanted to surf," said Franssen, who has lived in four different countries and two states here in the U.S.

"I used to watch a show called 'Rocket Power' when I lived in Belgium, and I thought it just looked so cool. When I was in Texas, I got my first chance to surf … and I loved it."

Franssen started West Broward's surf club herself, starting a petition and getting permission from the administration.

"When I came to Florida, I had a better chance to learn," said Franssen, who moved to Florida last summer.

The Surf Club had a packed schedule during the school year. Members would skateboard in the parking lot behind the school almost every week.

They took their first surfing trip to Fort Lauderdale Beach in March, they went on a Flow Rider (indoor surfing) trip in April (check this), and they did a beach clean-up and a stand-up paddle boarding trip this summer.

Will Gonzalez, a sophomore, is a member of the surf club, and he loves it. He attended their first surfing trip. "It's fun to really interact and learn new things," Gonzalez said. "It gave me a chance to learn new skills, be more sociable, and be more active."

"I'm hoping to show kids at West Broward something different, to try a new activity and bring people together," Franssen said.

"I hope to create a group of people that can get along, get together, and hang out and surf. I'm hoping to get surfing more known. Even though Florida's swell is very inconsistent, it's still possible to surf here." 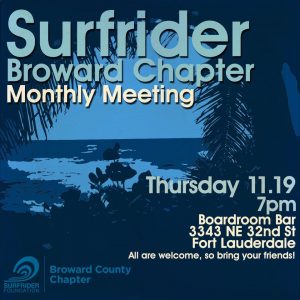